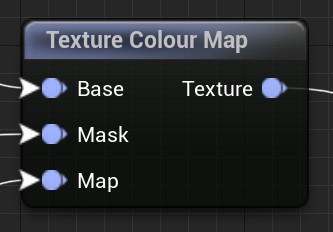 In more simple terms, the dark areas of the base texture will be swapped in color to make use of the colors found on the left side of the "Map" input texture, the mid tones will see a similar effect just that the new values will be mapped to the middle range of the input gradient and, at least, the higher value pixels will be updated to use the color found on the right side of the input gradient map.

Bellow is shown a simple example where you can see the node in action: Base: The main input texture used by the node. It will be the texture whose colors change by the end of the operation of this node
Mask. Determines what areas of the "Base" texture will be affected by the operation of this node. Values lower than 0.5 (gray) will not be processed. It is optional.
Map. Gradient image that will be used to map each pixel on the "Base" texture to the according pixel on this gradient texture based on the value of the "Base" texture pixel For example, a value of 0 on a pixel from the base texture will mean that the pixel will be swapped by the color found on the X=0 position on the gradient. On the other hand, a value of 0.5 will be swapped by the color found on the middle of the map texture.

Texture: Equal to the "Base" texture but with the colors swapped using the "Map" texture and the "Mask" texture if this is provided.