Define a constant projector. It can't move, scale or rotate at runtime. The texture that is projected can still be changed, depending on the configuration of the other inputs of the texture project node that is connected to the projector constant.

Define a static projector, like a facial scar.
Define a projector with a fixed transform but with modifiable contents, like the emblem of a shield or a shoulder-pad. 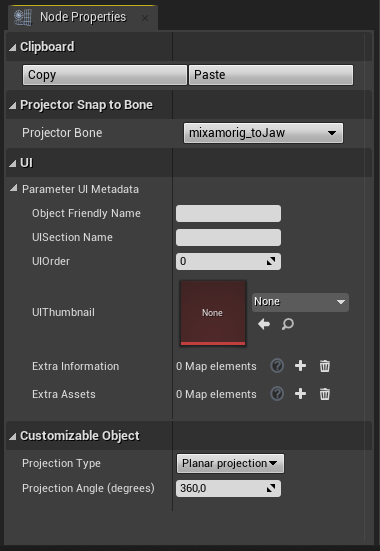 Copy (button): Utility for copying the current transform seen in the Preview Instance Viewport. Useful for applying the same transform to different projectors or to manually save a copy of the current transform before trying some new location.
Paste (button): Utility for pasting the output of a projector copy button. It allows to set this projector transform the same as the one copied from.
Projector Bone (dropdown): Utility for setting the gizmo location and rotation to match the chosen bone. Really helpful for cylindrical projectors.
Parameter UI Metadata: Metadata associated to this constant projector.
Projector Type (dropdown): Allows choosing between planar, wrapping and cylindrical projectors.
Planar projectors are best on more or less flat surfaces.
Wrapping projectors are intended to use on top of more complex geometry.
Cylindrical projectors are intended to use as wrap around elongated sections of mesh smaller than the projector radius.
Projecion Angle (degrees): When a cylindrical projector is chosen, defines the angle around which the texture will be stretched. An angle of 360º means that the texture will wrap around and the ends will touch at the back. This parameter is ignored if the projector type is not cylindrical. 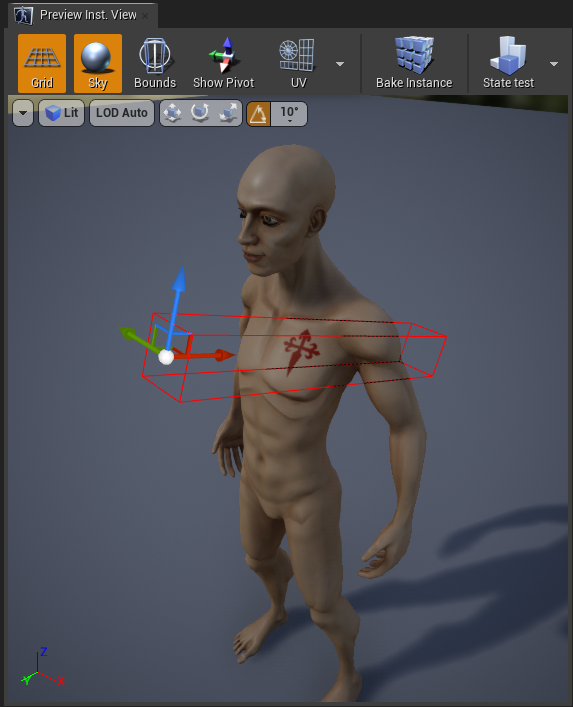 Value: Constant projector as setup in the properties located where the red gizmo defines.