This article explains how to add texture-based variations to a base character. Two examples of bandages applied to the character's right hand show different ways to add them as options. The first example uses a toggle button to enable or disable a long bandage whereas the second one has a selectable drop-down menu with a long-sized bandage, a short-sized one, and a no bandage option. Each bandage's size is a different Child Object of the character's body.

Apply a toggleable bandage on a hand

This case explains how to create a toggleable option of a character's texture-based bandage on its right hand by editing its parent's material parameters and using the new corresponding textures and masks. Moreover, this texture variation is enclosed in a child's group to allow its activation or deactivation by the end-user. 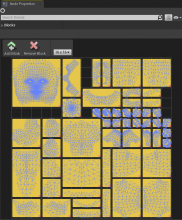 In this example, the grid proportion required is 16x16.

In this example, the name is “Bandage” and the type of group is “Toggle”. 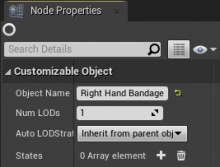 In this case, the children object’s name is “Right Hand Bandage”.

In this example, the selected material is “TextureBandage_M”

Below the Parent sub-tab, the parent’s mesh layout with the blocks already created should appear. 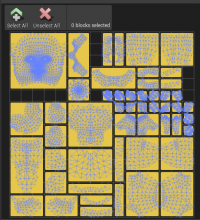 Now, select the body parts’ blocks corresponding to the character's right hand and the long bandage. 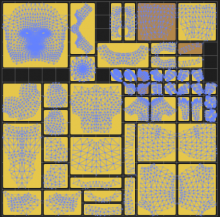 In this example, the blocks related to the right hand and forearm are selected because of the long-bandaged texture's size. (Four blocks selected)

As the bandages are applied on both hands in the Textures assets (both color and mask), by selecting the layout's blocks is how it is defined which hand has a bandage on, even both hands could be selected if wanted. This system allows for multiple options with no additional work.
At least one block from the layout must be selected to apply any texture variation.

In this case, the Texture chosen is “TextureBandage_BandageLong_D”.

In this example, the Texture selected is “TextureBandage_BandageLong_N”.

In this example, the Texture selected is “TextureBandage_MaskBandageLong”.

Link the mask Texture node to the “Normal Mask” connection of the Edit Material node. Now, both “masks” connections should be linked to this Texture node.

Enable the bandage option. In the Preview Instance Viewport tab, the character should look like this: 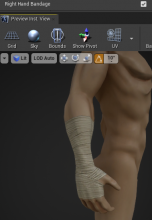 This case is an extension of the previous one. This example explains how to create a drop-down menu with two texture variations of bandages (a long and a short one) for a character's right hand and a no-bandage option.

The same assets used in the previous example as well.

This exercise starts where the other one finished, but it is created in a new Customizable Object example.

Select the Group node and change the name if wanted, keeping in mind that two bandage options are to be enclosed inside it. Change the type of group to “one or none” to convert it into a drop-down menu after compiling.

In this example, the Group name has been changed from ”Bandage” to “Bandage Right Hand” and, the Group Type, from “Toggle” to “One or none”.

In this case, the child object’s name is “Long”, as the bandage’s textures used in the previous example were the long ones.

In this case, the children object’s name is “Short”.

Repeat some steps, from Step 8 to Step 16, used in the first example to create this short-bandaged child asset, but applying its respective short bandage variation textures. Keep in mind some small differences explained in the following steps.

Now, in the Node Properties tab, select only the blocks related to the character's right hand and short bandage. 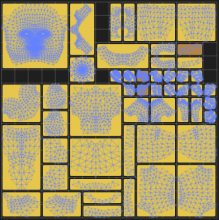 In this example, the blocks related to the right hand are selected. (Three blocks selected)

Create the first Texture node, connected to the “Base Texture”. In its Node Properties tab, apply the color texture of the base character with short bandages on it.

In this example, the texture selected is “TextureBandage_BandageShort_D”.

Create a second Texture node, linked to the “Normal” connection of the Edit Material node and load the normal texture of the base character with short bandages on it.

In this example, the texture selected is “TextureBandage_BandageShort_N”.

Finally, create a third Texture node, linked to both “Mask” connections of the Edit Material node. Set a mask texture of the character’s body parts that are affected by the short-bandage textures in its Node Properties tab.

In this example, the texture selected is “TextureBandage_MaskBandageShort”.

Unfold the drop-down menu and check that three options are available.

In this case, the three options should be “Long”, “Short” and “None”.

Check that all the choices work well on the character.