Please read the Create projected tattoos or stickers section before reading this one. This section describes some issues that may arise implementing complex image projection with nodes and the solutions Mutable provides to streamline the process. There's a complementary guide for programmers Multilayer projection programming.
The multilayer functionality only works with switchable parts that are implemented in child objects and use their own material nodes (not extend material nodes).
It's much easier to implement if all the switchable parts share a common base UE4 material.

Some games may need a lot of stickers, so creating nodes for each and every one of them can be cumbersome and create huge graphs. In fact, it may even be unknown during development how many will be needed because it could be up to the player to decide how many are wanted.

On top of that, the surface onto they have to be projected may even be unknown, or even not exist yet! That is the case with switchable parts. You may want to project an image onto the jacket the player is wearing, but that jacket is switchable at run-time. Duplicating the nodes required for projection for each and every jacket is just too much work.

Multilayer sticker projection is Mutable's solution for both of these problems. With just one node, this system will let you set up multiple layers of stickers, on any item of a group. For example, instead of having to add projection nodes to every single jacket in the project, you just have to connect one node to the jacket group node in the Customizable Object root asset, and you will get multiple layers of stickers on any jacket. 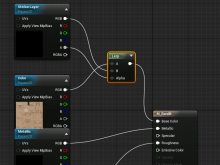 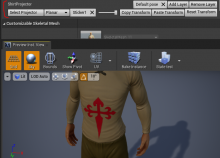 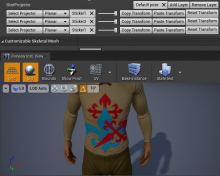 To share multiple textures between multiple projector nodes, a Data Table can be used. 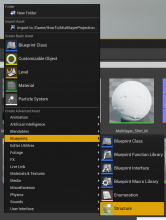 In this example, the Structure has been named DataTableStructure.

In this example, the column has been named TexutreColumn. 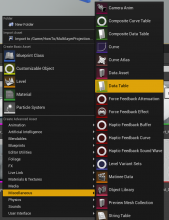 In this example, the DataTable has been named DataTable.

The names of the Data Table rows will identify the stickers and will be used as Option Names.