This article explains how to change a character's skin tone by selecting a new one from a color bar using Mutable Character Customization System for Unreal Engine 4. In this example, a gradient skin color bar is used to get a wide range of color shades by moving a selector slider. Moreover, the blending effect between the character's base color and the color bar tones is introduced to help with a better result.

Change the skin tone of a character

Each layer created in the Texture Layer node has two connections: the "Layer X" and the "Mask X" connections.

Still in the Graph Node Properties tab, click to unfold the tab of the new layer created. Choose the blending effect preferred among all the options displayed by unfolding the Effect sub-tab. This effect will determine the visual interaction between the samples from a color bar texture and the base layer. 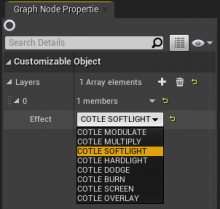 The Effect in this example is left by default as "Cotle Softlight".

After finishing all the steps, if the colors displayed on the character are not similar to the ones on the color bar, try changing the blending effect.

In this example, the "SkinTone_BaseTexture_D" texture is used.

In this example, for the "Mask 0" connection, the "SkinTone_SkinMask" texture is used.

In this example, the" SkinTone_ColorBar" texture is used.

Change the Default Value if wanted to change the color displayed as default after compiling the first time.

In the example, the Parameter Name used is "Skin Tone" and the Default Value is changed to "0.0" to take the first color of the "skin color bar" as default.

Click the "+" icon of the Description Image to enable the option of showing an image in the slider selector. Name this new connection by clicking on the small sub-tab of this new "0" layer created and changing the default name. 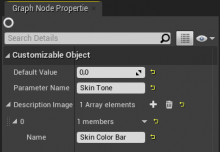 In this example, the Description Image is called "Skin Color Bar".

Try to move the "selector slider" and select a color. It must be immediately visible on the character's skin. 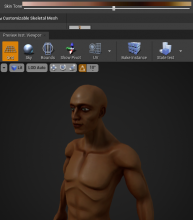