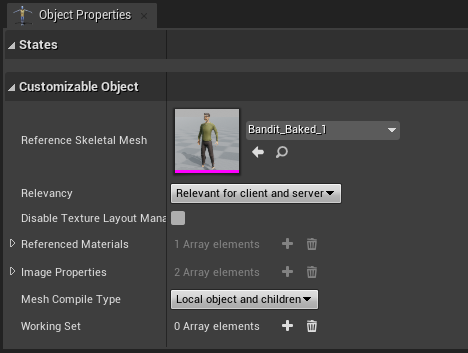 Two child objects directly connected to the parent (they are not a selectable option in the Preview Instance Viewport):

Each Group has a Group Type which can be one of the followings:

States are a feature of Mutable which allow to optimize the instances updates. Object state optimization is optional, and means that you can have several "states" in your character, and each state is optimized for the changing of some customization parts and not others. Ex: One state can be optimized for face changes, another state for body changes, another state for tattoos and another for only the things that can change during gameplay. Using states means that the character update time can be much faster when only changing the parameters that are optimized in the state that is selected for the character. A State represents a specific use case in the game (like in-game, cloth customization, facial customization, etc.) and can be configured with a set of parameters that Mutable is going to have ready for modification. See the Sates page for more information.

Mutable data streaming is very important for memory usage reduction. As you may know, a customizable character may have hundreds of options and customization parts. Without data streaming they would have to be loaded from disk to memory all at the same time and they would use many GBs of RAM and it would take a long time. With Mutable data streaming only the parts that are actually being used are loaded to memory, greatly reducing memory consumption and load times. In addition, when a part is no longer used it is unloaded.