This article explains how to create four examples of Customizable Objects involving morph targets, from the simplest to the most complex one using Mutable for UE4. The first one consists in applying a permanent mesh variation (protruding ears) without any parameter, the second example uses a Child Object to modify the nose and creates a toggle to enable or disable the morph, the third one recovers the ear morph but controlling the grade of rotation through a slider and the last example mixes two head morphs applied on the same character’s mesh using graph curves to control their gradual values.

This is the simplest example of a mesh morph in a Customizable Object. An “ear rotated” morph is proposed as a single and constant result.

In this example, the “Ear_rotation” is the chosen morph.

The “Value” ranges from 0 to 1. In this example “1” is set to have the full morph modification. 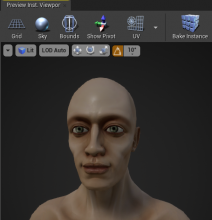 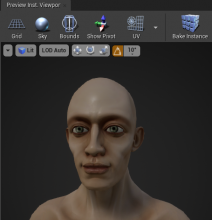 The result is similar to the “Add a simple shape variation” example but, in this case, the objective is to add a morph using a Child Object and enclose it in a group to enable or disable it through a toggle button. For creating this example, a prominent nose is proposed as a morph.

In this example, the Group’s name is “Nose Variations” and the Group Type is “Toggle”.

In this example, the Child Object is called “Nose Pepper”.

In this example, the Parent’s material is “ShapeVariations_M” and the Morph Target selected is “Nose_pepper”.

Then, check the Preview Instance Viewport tab that no morph is already displayed. The character shouldn’t have changed before enabling the toggle button: 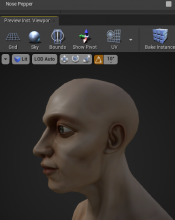 Now, click on the toggle button and the morph should be applied: 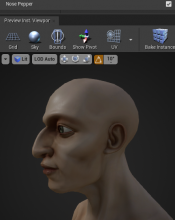 The first constant example can also be done by following this second example's steps disregarding the Group node step.

Control the amount of a morph with a slider

In this example, the mesh morph is used as the final shape of a gradual modification of the mesh. The variation between this morph and the default mesh offers a great number of modifications. The same exercise of the ears’ rotation is proposed but with all the intermediate shapes available by moving a slider.

This example begins where the previous one finished.

Create Comment boxes if wanted to arrange and organize the nodes in the Source Graph tab.

In this example the morph selected is “Ear_rotation” again.

In this example, the Default Value is 0, so by default the morph is not applied at all. The Parameter Name is “Ear Rotation”. 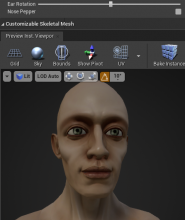 In this last example, a Curve asset is used to mix two head morphs (an elongated and a blunt one) with the base shape. This asset permits combining multiple morphs through curves that can be reshaped, if wanted, to avoid its linearity. Moreover, a slider takes part in this case to control the Curve asset's horizontal axis: the graduation starting from the first morph, passing through the base mesh and arriving at the other morph.

This example begins where the previous one finished.

To accumulate morphs, the Mesh Morph nodes must be serially connected to each other between the Skeletal Mesh node and the Material one.

In this example, the Morph Target applied is “Head_crushed”.

In this example, the Morph Target applied is “Head_eggShaped”.

In this example, the Curve Asset selected is “ShapeVariations_Curve”.

Click the Curve Asset thumbnail to get inside the asset and modify its curves or other properties if wanted. 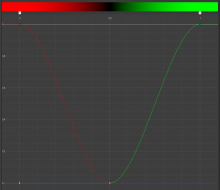 In this example, two curve's channels are used: “R” linked to the “Head Crushed” morph and “G”, to the “Head Egg Shape” one. These curves begin with the first morph at 100% (the other one at 0%), pass through a 0% of both morphs in which the base mesh is shown and, finally, end with the last morph at 100% (the first one at 0%). The horizontal axis's values are the ones that gradually go from one morph to another passing through the base mesh in the middle. Moreover, the shape of the curves describes the behavior of the progression, so in this example, the variation is slightly more abrupt in the middle of the graph than in the two ends.

When linking a connection of a Curve node to a Mesh Morph node, the curve's channel that represents it gets related to the morph. The first connection is equivalent to the first channel in the Curve Asset and it proceeds equally with the following ones.

In this example, only two channels are used.

In this example, the Parameter Name is “Head Shape” and the Default Value is “0.5” since it is the value in which the influence of the two morphs is zero. 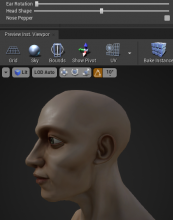 In this picture, the “Head Shape” slider is set by default at 0.5, so the mesh is the base one. 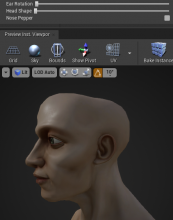 In this picture, the “Head Shape” slider is set at 0, so the “Head_Crushed” morph has been fully applied. 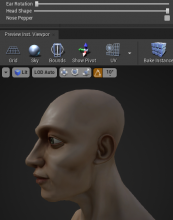 In this picture, the “Head Shape” slider is set at 1, so the “Head_EggShape” morph has been fully applied.