This page features the creation of a Customizable Object with two child objects (two pieces of cloth) enclosed by a Group node that allows choosing the way of enabling or disabling each one of them. Each child asset exemplifies a different way to create objects’ hierarchies: the first one is a child that uses the same parent’s material through nodes that permits the modification of some textures, and the second one, uses its own independent material. In both examples, the pieces of clothes are two different types of trousers.

In this first example, the cloth piece proposed is a pair of officer trousers. This child object is sharing the same material as the parent’s through an Extend Material node which allows the modification of the parent material’s parameters by connecting its slots to new textures.

The assets used in this example can be found in the Village Demo in Content/HowTo/ClothPieces
A parent material's number of parameters define the number of modifiable slots that a child object, sharing the same material, would inherit.

In this case, the Group is named “Trousers”.

Choose the type of group preferred in the Group Type sub-tab.

In this example, the type selected is “At least one Option”, which creates a drop-down menu of choices in which, at least, one option must be enabled.

In this example, the first Child Object node is named “Officer”.

Link the “Unnamed Material Mesh” connection of the new Skeletal Mesh node to the “Add Mesh” one of the Extend Material node, at the Source Graph tab.

In this example, the texture used is “ClothPieces_TrousersOfficier_D”.

In this example, the texture used is “ClothPieces_TrousersOfficier_N”.

At the Preview Instance Viewport tab, the character should look similar to the image below.

Add a child object using its own material

This second and last example is an evolution of the first one in which another child object is added, but, in this case, the material used is a different and independent one that includes its own color and normal texture. 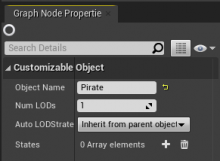 In this example, the second Child Object node is named “Pirate”. 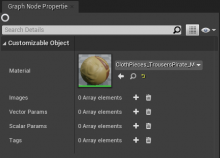 In this example, the material used is “ClothPieces_TrousersPirate_M”.

In this example, the mesh used is “ClothPieces_TrousersPirate”.

Link the two purple “Mesh” connections of the Skeletal Mesh node and the Material one at the Source Graph tab.