This guide will show how to set up a fully featured Mutable in a source code version of Unreal Engine.

1) Get a clean working copy of the matching Unreal Engine version, for example 4.25.4. Each release of Mutable targets a specific engine version. Follow the official instructions from Epic. For example, if you are using TortoiseGIT, you should clone with the following options to select a branch: 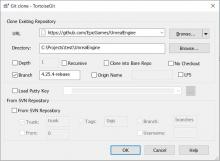 Modify the branch name so it matches the one targeted by the Mutable release you are using.

2) Download and apply the necessary engine patch. The patch can be downloaded on every platform download page. For example this page is for Windows platform. Access to some platforms may be restricted based on your license. To apply the patch, there are several options:

WARNING: If you get error messages when applying the patch, please make sure you cloned the Unreal Engine tag that matches the release of Mutable that you downloaded. The tag for each version is specified in each download page.

3) Build the new engine, following the official instructions. This usually involves running Setup.bat and GenerateProjectFiles.bat again, do so.

NOTE: The Mutable plugin contains source code, so it cannot be used with Blueprint-only projects unless it is installed in the Engine Plugins folder instead of the Game.

5) Download and unzip the Mutable plugin in your project's Plugins folder. The resulting path should be

6) Close the editor and Visual Studio, run Setup.bat and GenerateProjectFiles.bat again, and regenerate the Visual Studio project files for your project:

7) Open the new Visual Studio project, start the editor and then enable the plugin. Go to the main menu Edit → Plugins dialog. The plugin will be in the Project section. A restart of the editor may be necessary.

8) Open one of the example CustomizableObject assets, or create one following a tutorial.

9) If everything went well, when you open the Customizable Object Editor you should see the version number along with a label p: yes in the top right corner.