This chapter covers the creation of Customizable Object States. As an example, we will create one "in-game" state to use while playing and one "clothing" state for character edition.

Each State can contain any number of Group Object Nodes and any amount of the parameters in the Customizable Object hierarchy. A parameter can be one of the following types: Float Parameter Node, Enum Parameter Node, Color Parameter Node, Texture Parameter Node, Projector Parameter Node and Group Projector Parameter Node.
A child object can contain its own States. A State defined at a Child Object functions identically to a states defined at the Base Object.
It's advised to split character edition states into multiple coherent states as more parameters are added to the model. Parameters usually modified together, such as facial features, would go well in their own state, separate from clothing. It's uncommon to be modifying the face and the clothes at the same time. This division into states with less parameters frees resources and will allow the updates to be faster.
The resulting Customizable Object of this example can be found in the Village Demo in Content/HowTo/DataDrivenUI named "DataDrivenUICharacter". 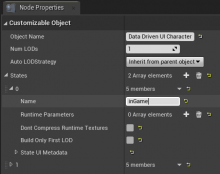 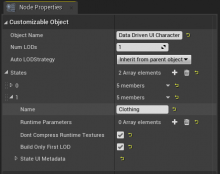 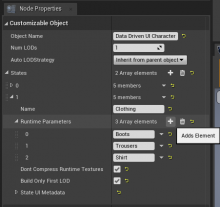 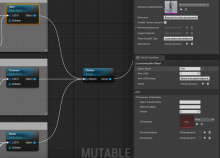 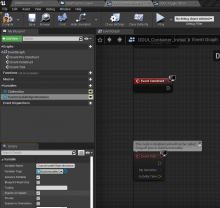 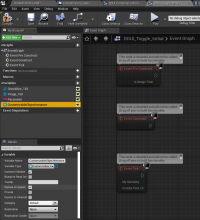 The fully fledged UI widgets and blueprints provided as example with the demos is free for you to copy and use for any purpose, including commercial purposes and/or further customize it to fit your needs. This applies to all the widgets and assets found inside the mutable plugin content path: Content/UI/DynamicallyGeneratedGUI_DGGUI.
Subscribers
None